Lego astronaut cruises from Canada to the edge of space 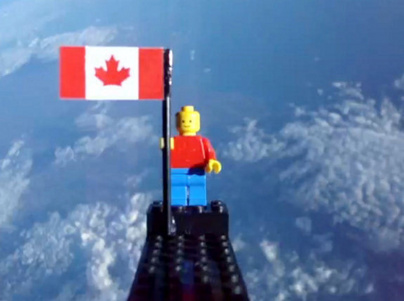 A pair of Canadian teenagers made a Lego man into a 24km high-altitude tourist with a home-made parachute and a weather balloon bought on the internet.

The 17-year-olds recovered their tiny space tourist and photographs of him standing with the Canadian flag and a background of the curved Earth.

Matthew Ho and Asad Muhammed captured the 97-minute journey to edge of space and back using cameras bought on the internet for £254.

Muhammed couldn’t speak English when he was befriended by Ho at middle school shortly after emigrating to Canada from Pakistan.

They spent four months of Saturdays on the project, drawing up plans, stitching the parachute on Muhammed’s mother’s sewing machine, and carving a styrofoam box for the still and video cameras which would photograph their bold adventurer.

After testing their parachute - throwing it off the roof of Ho’s dad’s apartment building to the consternation of some neighbours - they ordered a weather balloon and helium online.

The journey would be tracked by a cheap mobile phone with built-in GPS, using a an app that would send them its location whenever it was in range.

After weeks of waiting for the right weather conditions - they didn’t want their traveller to cross the US border - they launched the balloon from a nearby football field.

The balloon soared out of mobile phone range and out of sight, rising to 24km (80,000ft) in about an hour, where it was predicted to explode and release their payload back the Earth.

Soon after that, the mobile phone messaged Ho’s iPad to say it was back in range, and had touched down 122km away.

The next weekend they drove out to the brush and found their Lego man and cameras intact. Back at home, they uploaded two videos and 1,500 photos of their successful mission.