If SXC flies on schedule, 32-year-old Anton's sub-orbital spaceflight will take off in 2014 from of Curaçao in the Dutch Antilles.

The $95,000 ticket will send the investments expert and his pilot to around 100 miles above the Earth, where they will enjoy several minutes of zero-gravity and the best view money can buy before flying back to the Caribbean.

Anton told A Holiday In Space: "It fascinates me to push boundaries. I've travelled around the world a few times, and there's no way to go now except for up.

"They stuck the Hubble in space for a reason, and I'm going because there must be something very special to see up there." 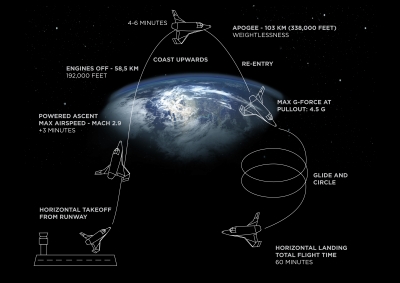 As one of SXC's first 100 fully paid-up customers, Anton even stands a chance of flying on its first flight, currently scheduled for 2014.

In addition to a luxury stay in Curaçao and pre-flight training in a zero-G aeroplane and centrifuge, the 'Founder Astronauts' will draw lots to decide who goes first.

Anton won't be the first British astronaut - Michael Foale had that honour aboard the Space Shuttle and MIr in the 1990s - but he will be the first to pay for his own ticket, and Foale had to take American citizenship in order to join NASA.

Reply fueshyStesept
11:50 PM on February 19, 2013
When you are planning the wedding it might often seem like your wishes can be next to everyone else's. You could have your center established on daisies although your new mother is driving for flowers. Perhaps you adore dark brown and pink to your bridesmaids garments, however, your maid of recognize is pushing for reddish colored. This post ought to give you many ways for producing positive your wedding event will be your day time.

In order for a wedding party as a success, audio needs to be appropriate and get the atmosphere established! Make sure anyone who will be employed could get your guests inside a pleased and enjoyable frame of mind! You don't wish to get a uninteresting wedding party or you will not have access to an exciting time.

When you purchase a ceremony or wedding reception site that is outside, choose natural components which will not clash with all the placing. This means a give attention to resources like older hardwood, teas-stained elaborate lace and embroidery, and plants. Emphasize sprigs and blooms like prairie grasses, whole wheat chaffs, and colourful wildflowers in imperfectly established bouquets.

To lower stress, tend not to forget to delegate responsibilities to those around you. Enabling your bridesmaids, groomsmen, friends and family to handle several of the activities connected with organizing and organizing the important day time, can help to lessen anxiety. This leads to creating the entire process a lot more fun for all.

Give yourself a break or other bride-to-be around an exciting, unique keepsake: a shaped cake topper or pieces of paper sculpture in the bride's bridal dress. Submit a comprehensive take pictures of of your wedding gown, plus a talented combined-press performer will replicate it employing archival fasten and acidity-totally free pieces of paper. The creation will last for many years and can be displayed at the reception or in the house.

A great suggestion to be aware of for wedding parties is to make sure that you focus on ideas that your photographer gives. They will likely only tell you the things they believe is best for you, of course, if you disregard them then you might stay in for many hostility and very poor image quality.

Look at through an alcoholic drinks-totally free reception to relieve the concerns that inebriated friends might cause. If you do choose to go this course, make sure to supply a lot of beverage choices to your friends and family including soda, water, coffee, and teas so that they don't seem like they're getting parched. Developing a selfmade fresh fruit impact dished up inside a fountain can create a gorgeous centerpiece for the catering desk!

Good wedding and reception planning hits a delicate stability among efficiency and memorability. The best wedding event is certainly one that sticks in the heads of all of the members without the need of needing big expenditures of work and money. The tips on this page will help improve a wedding event without the need of costing lots of money. A memorable wedding party is actually a deserving objective to shoot for, and this target need not be difficult to obtain.